The Tirta Empul Holy Water Temple is located in the village of Manukaya, near the town of Tampaksiring, not far from Ubud, in the Gianyar Regency, the cultural heart of Bali. The temple is situated just below the Presidential Palace of Tampaksiring. Built in 1957 by Indonesia's first president, Soekarno, the beautifully built palace itself is an important landmark of the island and the country. Together with the Presidential Palace, the Tirta Empul Holy Water Temple provide some of the most fascinating views you will ever see. As a Petirtaan or bathing center, Tirta Empul is quite a large temple complex and it takes at least 30 minutes to an hour to explore the entire site. Just as at other temples and sacred sites around the island, you will need to put on a 'sarong' before entering the premises. The sarongs are available at the temple's entrance and can be rented for a small donation. 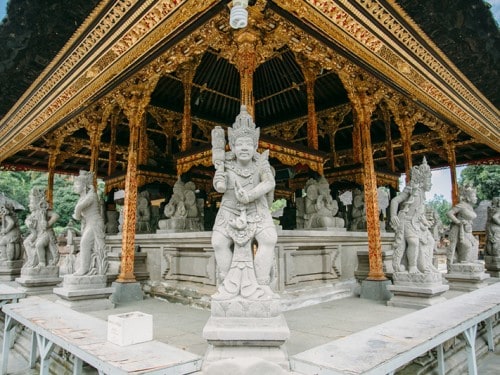 As soon as you enter temple, you will walk through the large stone Balinese gate (locally known as Candi Bentar) and arrive in the outer courtyard of the temple. This area of the temple is called 'Jaba Pura. 'At the end of the courtyard is another Candi Bentar built into the wall that leads to the central courtyard. This gate is guarded by smoothly carved huge statues of two Dwarapala or guardians given a brush of golden colors. At the top of the gate is a carving of Kala which is quite different than other Kala carvings elsewhere since it has fangs that stick upwards and a pair of hands with open arms. Entering the inner courtyard, you will arrive at the 'Jaba Tengah' area which is the main area of the temple. The holy springs here bubble up into a large, crystal-clear pool within the temple and gush out through 30 waterspouts into the two sacred purification pools. Local Balinese and Hindu worshippers stand in long lines in the pools waiting to dip their heads under the water spouts in a purification ritual known as 'melukat'. Bathers start in the pool on the left side standing in the pool to the waist under the first water spout. Once they have cleansed themselves under the first spout they join the next queue. This process is continued until they have cleansed themselves under each waterspout. However, there are two spouts that are meant only for cleansing the dead and are for prohibited to be used by the living for the 'melukat' ritual.

Tanah Lot Temple is one of Bali’s most important landmarks, famed for its unique offshore setting and sunset backdrops. An ancient Hindu shrine perched on top of an outcrop amidst constantly crashing waves; Tanah Lot Temple is simply among Bali’s not-to-be-missed icons. The onshore site is dotted with smaller shrines alongside visitors’ leisure facilities that comprise restaurants, shops and a cultural park presenting regular dance performances. The temple is located in the Beraban village of the Tabanan regency, an approximate 20km northwest of Kuta, and is included on most tours to Bali’s western and central regions. 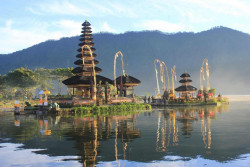 Bali Sankara Tours
Chat Us With Massanger Apps In Bellow